Posted at 11:41h in Vehicle by StyleWeekAdmin 0 Comments
0 Likes

During the 17th Century to the 19tjh Century, the British navy were spread all across the world. This was the pride of Britain at the time and partly what made the British empire so strong and so vast. The ships of these years were made of wood which would have been supplied by someone like these timber merchants Southampton www.timbco.co.uk/ and built to do their specified job. The navy was a huge organisation and there were many different ships within it, with each having a rating (and some which were unrated). Here is a guide to the ratings and categories of ships that made up the British navy between the 17th – 19th Century…

The rated ships were given a rating between 1 and 6:

Sixth Rate – Small and very lightly armed, these ships had less than 30 guns onboard and crew of no more than 150 people.

Fifth Rate – These were fast and designed to spot enemies before the rest of the fleet. Lightly armed with under 40 guns, the main purpose of these swift ships was speed.

Fourth Rate – These were double decker ships and had a variety of uses. When not in a battle situation they were used to escort convicts and were used as headquarters when supervising operations. With around 50 guns on board they were more highly armed that the fifth and sixth rate ships and larger too.

Third Rate – These ships were built for war, and were armed with over 70 guns and a crew of around 650 men. These were the main ships in a battle situation and were extremely good at their job.

Second Rate – These were large, three decked ships with over 90 guns. Weighing around 2000 tonnes, these were giants in the battleship arena and would often be used somewhere in the centre of a battle formation, flanked by third rate ships. However, due to their size they were very difficult to handle in comparison to the third rate ships.

First Rate – If the second rates were giants, these were the true goliaths! Carrying a minimum of 100 guns and had a crew of over 850 people. They were very valuable so would be kept at the centre of a battle line, and were often also used as flagships.

Unrated vessels were those that had other jobs within the fleet. They were usually run by lieutenants and commanders, as the very high ranking people would be in charge of the rated ships… 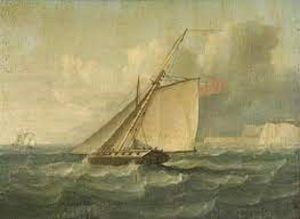 Fireships – These were built to do what the name suggests – set fire to enemy ships! They could also be used as an escort ship and were adaptable.

Cutters – The smallest ships in the fleet, the Cutters were designed to be fast. From taking messages, to patrolling, the cutters would often do many jobs in the fleet where speed was of the essence.

Sloop – The sloop was armed, but very minimally. A small ship that carried 120 men sloops were often used to do many of the tasks of a frigate.